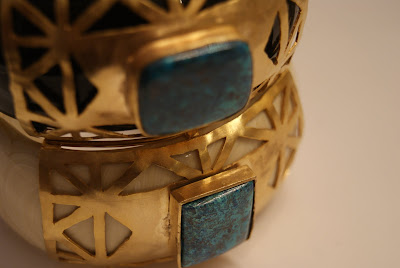 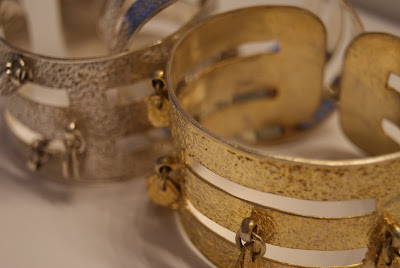 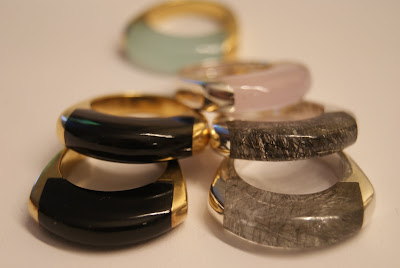 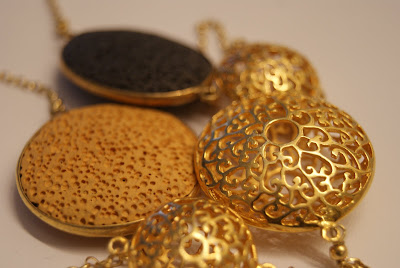 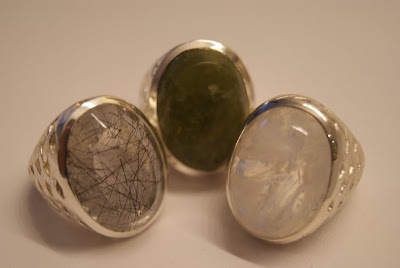 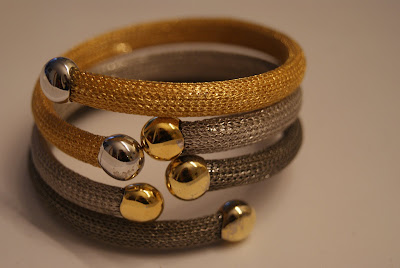 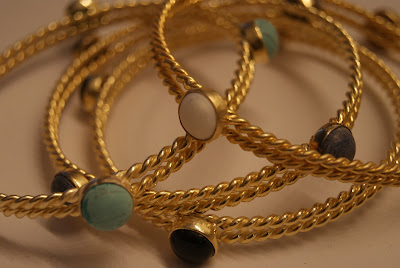 Between Fashion Weeks and everyday life, Anuja Tolia jewelry is astaple for any wardrobe. There is something for every event in the Spring/Summer 2011 Collection as Ms. Tolia once again displays her range with simple, ready-to-wear items, to her beautiful, signature statement couture pieces.

Color me surprised when I found the Cage Ring from Anuja Tolia – it has the same type of vintage gold feel with beautiful, clear stones to boot. At $120, I can definitely justify this purchase – choose between rose-quartz, amethyst, smoky topaz or black onyx and silver/gold plating – gorgeous.

Several months ago, Megan from Belles and Rebelles reached out to us with excitement about an emerging jewelry designer named Anuja Tolia. Her work is bold, dare we say fierce, with a fascinating blend of Indian and Western aesthetics. When we met Anuja, we were immediately taken with her talent and determination to succeed. We recently asked her to share a bit of her story, and to style a look pairing some of her pieces with works from other independent designers.

Anuja grew up in Michigan and went to Parsons for fashion design. She worked in that field for several years and then mixed things up by enrolling in the Studio Art Center in Florence, Italy. There she discovered her true passion: jewelry craftsmanship and design. Her 2010 was a whirlwind — in the first four months, she created her first line, and then traveled to India to begin production. She returned to New York City, had her first trunk show in July, and officially launched her line in August, all while traveling back and forth to India to work with her team. The results of her hard work is starting to attract the notice of magazines and celebrities alike.

1. What led you to become a designer?

I dont think there was one thing that made me want to become a designer. I always loved colors, costumes, and dressing for the occasion. I thought overdressing was always better then under dressing. But ultimately, when I came to New York in 2002 to do an internship with Norma Kamali is when I knew that I wanted to live in the city and be involved in the fashion world.

2. What are the inspirations for your designs today?

Inspirations wow! I think the biggest inspirations come from my friends and family and their personalities. But along with this for my first collection, a big inspiration was living in Florence, Italy. All the art, flavor, and culture really helped open up my vision and creativity.

3. What has been the best part of being an independent designer?

The best part of being an independent designer is to be able to have the fluidity of thought. I don’t ever feel that I have to follow guidelines or feel restricted by anyone or anything. I am allowed to think outside of the box which feels amazing instead of having to go by someone else’s vision or thought process.

4. What has been the most challenging part?

The most challenging part for me as a designer is running a new company and trying to be able to design along with doing pr, marketing, follow up, and taking orders. It’s very difficult to wear all hats. I would love to just be able to concentrate solely on design.

5. If you could pass one tip on to aspiring designers, what would it be?

Never give up! There are going to be high’s and low’s but no matter what industry you are in you are going to face these challenges. Don’t compare yourself to other designers. Just go for it and take the plunge.

John Lennon alleged, “Life is what happens while you’re busy making other plans,” and jewelry designer Anuja Tolia knows a thing or two about this sentiment.

After graduating from Michigan State, Tolia moved to New York with plans of furthering her education. After applying to the apparel design programs at both FIT and Parsons, Tolia chose the one she felt best suited her needs.

“I wanted to go to private school so I chose Parsons, which was a very helpful platform,” Tolia affirms. “It helped form personalities and allowed me to learn how to start a business.”

Today, the Michigan native boasts a degree from Parsons The New School for Design, has worked backstage at New York Fashion Week, and enjoyed a stretch at Liz Claiborne where she learned core design practices. While impressive enough for any big city dreamer to get complacent, Tolia naturally wanted more.

“At some point when the economy went downhill, I decided to do something different. I applied to the Studio Art Centers International School in Florence where I spent a year studying the art of jewelry making,” she remarks.

That year proved to be transformational as Tolia took the time to absorb every morsel of culture possible. “I tried to get inspired again. There’s passion in jewelry and I looked at the culture, contemporary art, magazine tears, and different hand-making factors like stone, wire binding; things you don’t see everyday,” she recalls.

As the program in Italy’s bustling city came to an end, Tolia returned to the States equipped with a firmer understanding of molding metals into bracelets, and experimenting with raw, uncut stones. With her prototypes and ideas for a new collection, Tolia joyously launched her jewelry line.

While Tolia is still adjusting to her new craft, she often finds herself juggling the many roles of running an independent jewelry company.

“Everything’s a learning process and with doing three lines a season I think, ‘should I take a break? Should I continue? Because I wear all the hats in my company.’ I’m jumping through some hoops trying to figure out how to solely keep my mind on design,” she states candidly.

In spite of that overwhelming feeling, Tolia knows that all it takes is that one incredible moment, when she sees her designs in real life, to make it all worthwhile.

She beams, “Honestly, the enjoyment of making something and seeing people wear it is what keeps me going. Accessories can make or break an outfit and people want things that are beautiful and affordable, so it makes me feel nice that they want my pieces. I think it’s just one of those feelings.”

Ever inspired, Anuja Tolia is ready to see where her creations take her. She hasn’t quite given up on designing and won’t rule it completely out of her future.

“I haven’t realized that designing clothes wasn’t for me yet. I felt that it just wasn’t time. I do want to eventually own a boutique with my own designs, but I’ll start with jewelry first.”

For more information or to shop the collection, visit Anuja Tolia www.anujatolia.com

The Accessories Show- @ The Javits Center

Lately the only jewelry I have been wearing is Anuja Tolia. It is all that I wore in Miami (here,here, here, and here-where, I must add, it garnered compliments from numerous designers and even our favorite supermodel, Irina Shayk!), and it is all that I have been wearing out and about in my everyday NYC life. I. AM. OBSESSED. And…I assure you, it is not hard to be. At all. I am ecstatic to be the first to introduce you to this up-and-coming designer and present to you her very first collection! Tolia’s debut collection is a glamorous mix of what she names as Indian artisanship and Western flare. She has not only traveled the globe, but she has studied across the world as well. With extensive time spent in New York City and in Florence, Italy, and what seems to be everywhere in between, her work certainly shows the influences of the numerous cultures that she has been immersed in. With the use of semi-precious stones, real silver, and gold plating, each piece exemplifies true beauty and a deep sophistication. Yet, it is worth noting the use of exotic and rough unfinished stones in much of her work, which gives her line an extremely contemporary, extremely edgy, and extremely playful twist. With the line divided into three sub-collections, named Florentine, Ready-to-Wear, and Couture, Tolia is able to speak to a wide variety of people. From the big and the bold to the intricate and the delicate, there is definitely a piece (or in my case many, many pieces) for everyone.